The City of San Luis Obispo had no municipal sewage treatment. Raw sewage was spread on open fields and disked into the soil as fields were rotated.

The City of San Luis Obispo constructed one of the first sewage treatment plants in California. The plant included a single clarifier and one open digester (still in use today).  Sludge from the clarifier was pumped into the digester and the digested sludge and effluent was spread and dried on open fields around the facility.

With the advent of the war and the establishment of Camp San Luis Obispo and the resulting influx of army personnel the City population soared to 20,000.  In order to accommodate this additional population the City expanded its sewage works to include two additional clarifiers and two biofilters (these are still in use today).  Sludge from the digester was still spread on fields; however, the effluent was now being used for irrigating crops on the sludge fields or discharged into San Luis Obispo Creek.  During the summer season sugar beets were grown on the sludge fields and irrigated with plant effluent.  Income from the farming operation paid the electricity to run the sewage facility.  During the winter plant effluent was discharged to the creek. 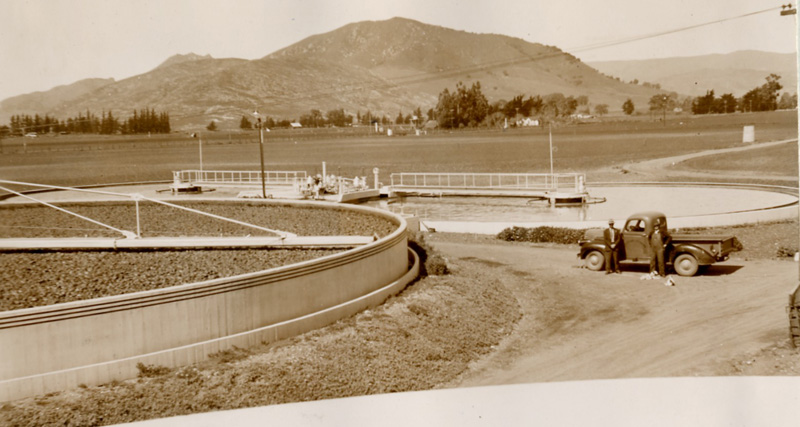 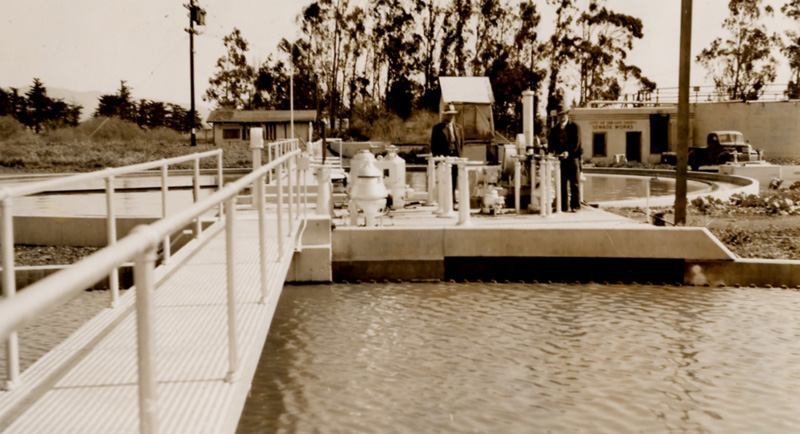 * Images of the wastewater treatment plant - captured in 1945

Additional processes were added to enhance the quality of the effluent.  A third biofilter and clarifier were added. (These, along with those installed in 1945 are biological processes and are the area of the facility that mimics a mountain stream).  Additional digesters were also added in order to handle additional sludge, (now known as "biosolids" now).

Additional processes were added to remove ammonia from the effluent, thereby protecting fish and other creek life.   This is the activated sludge process and utilizes the same microbiology as the biofilter.  Remember that all of the microbiology used in wastewater treatment is just common soil biology.

Also during this time technology caught up enough that we were now able to capture methane gas from the digesters and use it as a fuel source for the microturbines.  The microturbines generate electricity for used in the facility.

Below is a current video showing some of the WRRF.