"How does the City determine speed limits?" 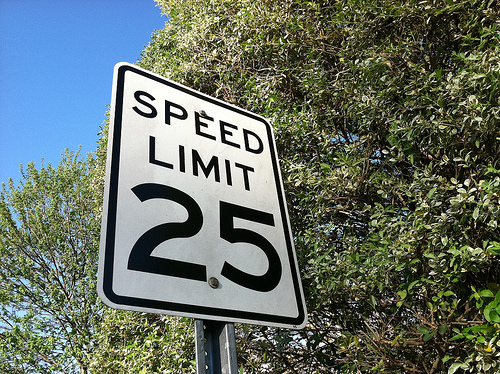 1. Staff collects speed data from 100 vehicles using a radar or laser gun. The vehicles included in the survey are free-flowing, and not during periods of traffic.

2. The survey identifies an 85th percentile of traffic, or the speed of 85% of traffic on the street. 15% of the traffic exceeds this speed.

3. Staff investigates recent collisions and considers other factors, as allowed in the Vehicle Code.

4. The survey is put on a form, signed and stamped by a professional engineer.

5. The signs required by the survey are posted.

See the map on the Traffic Counts page for established speed zones in the city.

"What can be done to slow down speeding traffic on my street?"

If vehicles seem to be going too fast on a City street, we'd like to know about it. First, staff will conduct a speed survey to quantify the speed of traffic. This is the same procedure used to set a speed limit.

In some cases, speeding is not actually occurring on the street and the resident is informed of these findings. When the data shows speeds exceeding the speed limit, the education and enforcement process begins. The Transportation Division contacts the Traffic Safety division of the Police Department so we can work together and address the concerns.

One resource utilized by Public Works is a Radar Trailer. This device encourages compliance with the speed limit and actively educates drivers. These devices are usually placed on the road for a week prior to or along with police enforcement. This device: 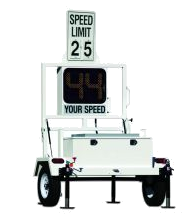 Some areas have a permanent V-calm Radar sign, which accomplishes a similar goal to the trailer, but in a permanent installation. These signs are most effective in critical areas, such as school zones, or areas with unique roadway design.

Neither of these devices issue automated speeding tickets.