The summer of 2020 has some exciting transportation opportunities the City is exploring including traffic calming, neighborhood greenways and public art to make the local street network comfortable for all transportation modes no matter your age or ability.

As part of the City’s Pavement Management Program, the Public Works Department completes annual pavement repair and maintenance projects, alternating between neighborhood local streets and arterial roadways each summer. These pavement projects provide an ideal opportunity to implement other planned safety improvements and complete street enhancements, as roadway striping and signage can be easily modified in a cost-efficient manner as part of the larger paving contracts. In 2020, local streets in Pavement Areas 4 and 5 are scheduled to be resealed (see map below - click to enlarge). 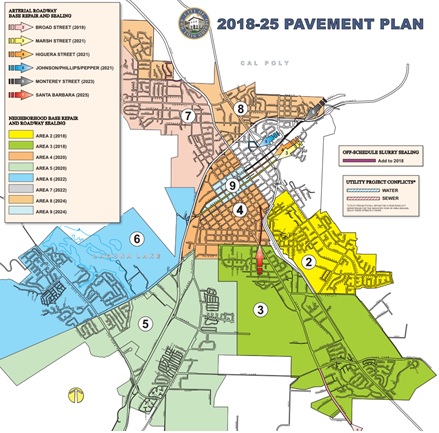 In the early planning stages of each paving project, Public Work’s Transportation Division and Capital Improvement Project (CIP) Engineering Division collaborate closely to identify potential locations within the planned paving areas where safety and/or multimodal improvements can be achieved through striping modifications.  Staff specifically targets projects identified in the Bicycle Transportation Plan, Annual Traffic Safety Program, those requested by the Active Transportation Committee, and based on engineering best practices for complete street planning.

Pismo Street from Johnson Avenue to Higuera Street is a one-way residential collector street consisting of one vehicle lane, a bike lane, and parking on both sides, except for the segment between Santa Rosa and Broad—which consists of two westbound vehicle lanes and parking on both sides. Multilane streets often induce higher travel speeds and exhibit higher collision rates than comparable streets with a single lane in each direction. Pismo Street exemplifies this trend quite clearly; despite a lower posted speed limit, the two-lane segment of Pismo Street experiences twice the collision rate of the nearby one-lane segments.

Transportation staff has reviewed existing and projected traffic levels for Pismo Street and have determined that a one-lane configuration would accommodate existing and future auto traffic demands, while offering the potential to reallocate street space in a way that better supports multimodal connectivity and safety. For this reason, staff is proposing to restripe Pismo Street between Santa Rosa and Broad to include one vehicle travel lane, street parking on both sides, and a buffered bike lane. This proposed configuration reduces exposure for pedestrians at intersection crossings and removes an existing gap in the crosstown bike lane network, providing a continuous westbound bike lane from Johnson Avenue (near San Luis Obispo High School) to Higuera Street.

The City’s Bicycle Transportation Plan identifies certain local street corridors as Neighborhood Greenways, with the intent to provide a network of low speed, low traffic routes that prioritize pedestrian and bicycle travel, while simultaneously enhancing the sense of place within the neighborhood. Previously referred to as “Bicycle Boulevards,” the naming of these corridors was recently updated to reflect the benefits of such corridors to an entire neighborhood. 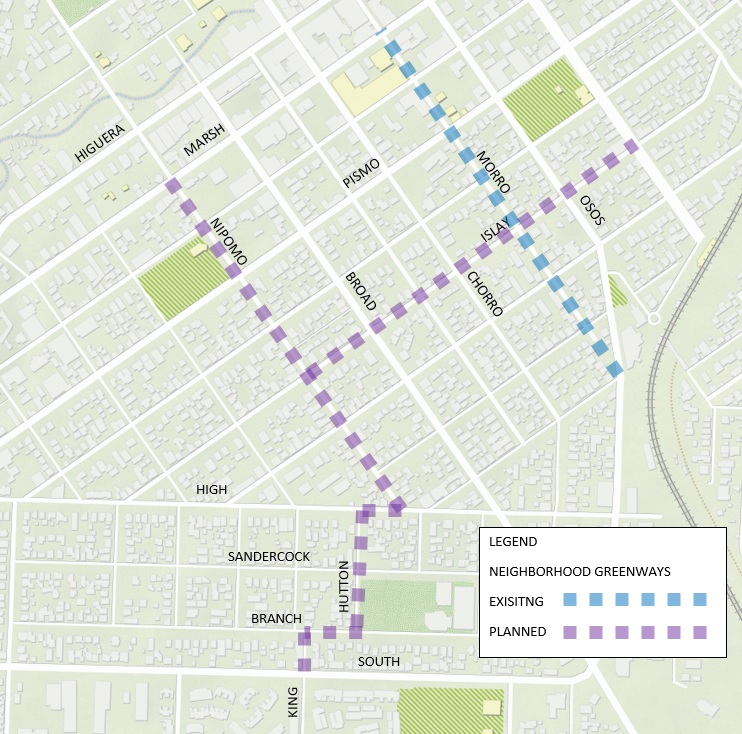 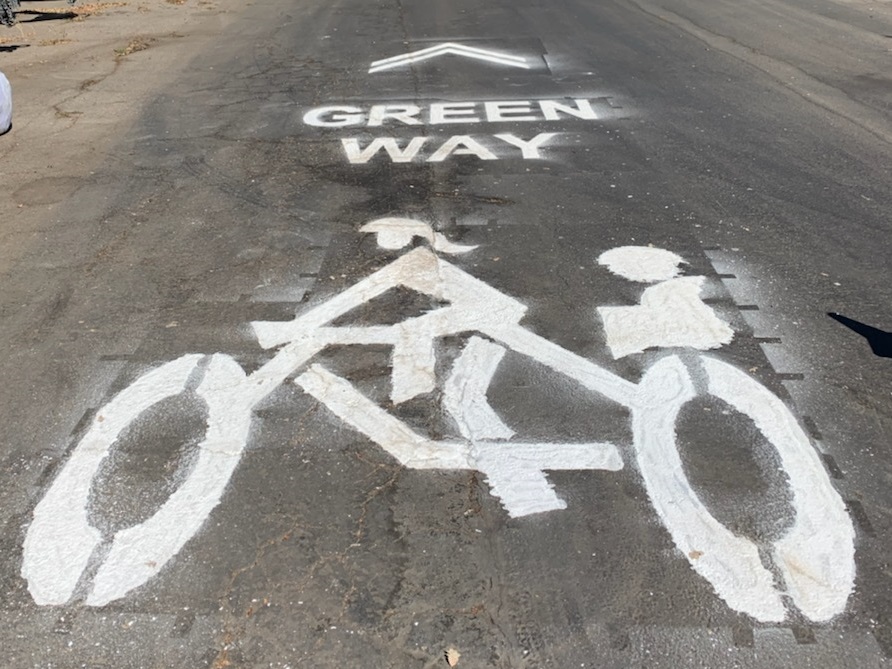 Neighborhood Greenways are shared streets--meaning there are no dedicated bike lanes. Traffic calming measures are designed to maintain low speeds and volumes on the corridor. On-street parking lanes will remain, with the potential for only minor parking restrictions at intersection corners where additional sight distance is needed for safety.

Transportation staff are collaborating closely with the Parks and Recreation Department to incorporate public art features along the proposed routes as part of the greenway branding—specifically, inviting proposals from local artists to develop designs for painted bulbouts.

There are two neighborhoods located within Pavement Area 4 where Neighborhood Traffic Management Program (NTM) projects have recently been initiated: High Street and south Chorro Street. In 2018, the formal NTM was put on hold due to a reprioritization of funding and a planned update to the program structure itself. As a result, both the High Street and Chorro Street NTM efforts were temporarily suspended. This has been particularly frustrating for the High Street neighborhood, where average vehicle speeds continue to exceed the City’s established residential speed targets by more than 10 miles per hour.

The 2020 Roadway Resealing Project provides an interesting opportunity to consider lower-cost interim treatments to provide immediate traffic calming relief until permanent solutions can be developed when the NTM program is fully funded again. While ultimately, these neighborhoods will remain at the top of the NTM program queue and final improvement recommendations are still expected to be developed in collaboration with neighborhood representatives, staff is recommending the installation of speed humps and minor striping improvements along High Street and south Chorro Street as part of the sealing program to address excessive vehicle speeds until further improvements can be made.

The addition of these interim traffic calming measures will be dependent on whether construction bids come in at or below project estimates.

For questions or additional comments regarding proposed transportation improvements for Areas 4 and 5, please contact Jennifer Rice, Transportation Planner/Engineer at jrice@slocity.org or 805-781-7058.