Largely due to funding made possible by the 1/2-cent sales tax increase, the City of San Luis Obispo has been able to implement an ambitious Pavement Maintenance Plan (PMP) which was adopted by the City Council on April 14, 1998. Each year, usually during the summer, Public Works performs significant street maintenance with the aid of a private contractor. Because determining the scope of this paving work is a complex process, it naturally generates questions from our community. 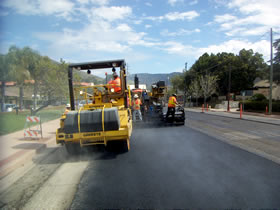 1. Street location
The City is divided into 9 pavement areas and work generally moves from one area to another each year. That means if we worked on a street last year, we probably won't be back there for 7 to 9 years. For the two years prior to completing street paving, utility lines are replaced, small pavement and sidewalk repairs are made, and sidewalk ramps are installed. This is done to minimize cuts into new street pavement which reduce its life. The core downtown area receives attention as appropriate every year as its streets are heavily used and are central to San Luis Obispo's tourist economy.

Check out our Paving Area Map to see how the City's pavement areas are divided.

2. Number of cars
The City Council was clear in developing the program for street maintenance; busy streets deserve more attention. This means that regardless of what area we would normally be working in, a heavily traveled street such as Madonna Road or Los Osos Valley Road may get attention more often than a residential street.

3. Street's existing condition
This is probably the most difficult part of the City's program to explain. Let's look at it this way:

Say you have $1,000 to spend this year on pavement maintenance and here is a list of streets you have that need maintenance:

So, if your goal is to have as many good streets as you can for the next 10 years, how do you spend the money?

The likely answer to this question by the City would be to spend $700 on the streets that are in pretty good shape to prevent them from deteriorating, and $300 on one of the so-so streets.

The City has many streets to maintain and so must look at more than just those that are bad to determine how to best spend the available funds. Fortunately, we also have more than $1,000 to spend each year on pavement maintenance, thanks to your support for this work! That means we do eventually get around to the streets that are falling apart and rebuild them. Once that happens, they are regularly sealed to keep them in good shape. 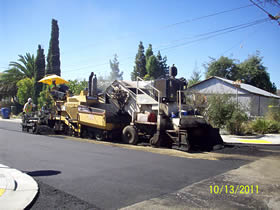 Additional questions that arise include the following:

What is that black stuff that gets painted on?
When a street is generally in decent condition with some cracks and perhaps some areas of failure, the street is sealed with an asphaltic material to prevent more costly repairs down the road. Water intrusion is a primary cause of street failure and sealing a street keeps water from penetrating the surface. If sealing is done on a regular basis, it can delay the reconstruction of any street almost indefinitely.

How important is the Pavement Management Program?
Roadways are the backbone of all other services we need. Without them emergency services such as police and fire protection cannot respond to our needs. Without roadways simple needs like going to the grocery store or the park could be more challenging for our residents. In essence, good roads help us get to the things that we need and like to do.

The City has maintained a good quality Pavement Management Program for many years, exceeding that of many other cities and counties. A review of the PMP by a private consultant confirmed that the program is well-thought-out and on track. Our PMP incorporates the elements that are expected of successful pavement plans which are:

Do we always stick to the schedule?
Unfortunately, that is not always possible. Although we do the best we can to keep to the scheduled maintenance program, occasionally something unexpected happens, such as emergency utility repairs in the affected area or a shift in funds available, and the paving priorities can change accordingly.

How has the 1/2-cent sales tax increase impacted our pavement management?
Since the increase was approved in 2006, and again in 2014, our community has invested over $7.5 million in roadway maintenance. That amounts to roughly 173 miles of a 12-foot travel lane!

The above information is available as a Pavement Management Brochure in PDF format for saving.