Leash is the Law in the Open Space

As part of the adopted action plan for the Open Space Preservation Major City Goal Parks and Recreation staff have been focusing on developing new education efforts to increase open space knowledge by our users.  The first effort discussed below is now underway and educates users about our existing “leash law” which requires all dogs to be on leashes when walked in the City’s open space for a wide variety of health and safety reasons.

On August 3, 2015, the Parks and Recreation Ranger Service staff began their two part education and enforcement campaign of Leash is the Law in the City’s Open Space in addition to in its parks.

As a friendly reminder of the City’s leash law, distribution of a dog off leash informational card and a complimentary leash inscribed with the City logo and Leash is the Law is now underway in the City’s Open Space.  City Rangers are using these tools to encourage good behavior and to educate Open Space Users before the issuance of fines. 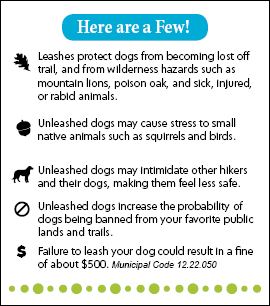